The Lost Art of Civil Discourse 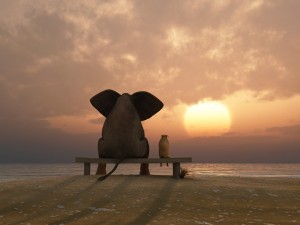 With the encouragement of my dear friend Daniel Wilson, here is the second in my series about what it is to be a man (see his blog “This Just In!”, link attached). Since my last blog, I have had more than one person tell me that the messages in my musings had equal application to women. I think there is much truth in that. More than defining the difference between a boy and a man, my hope is that these words convey more about what it is to be a mature, responsible adult, regardless of sexual identity. In any case, my focus will remain on the narrower topic and if this is useful to others, that is a blessing.

Another political season is upon us for better or worse. In this age of information overload, we are assaulted in almost every form of media with ads, news reports, blogs, tweets, Facebook posts, LinkedIn postings, instant messages, phone calls and even personal conversations about this person or that person. Many of these are designed to intentionally vilify, demonize, embarrass, humiliate and attack, not the position of the person, but the person himself or herself. This trend appears to have grown along with the rise of social media. It is ubiquitous, mean-spirited, and in my view, damaging to the social fabric of our society, and even to those who act this way.

Why is this happening? I think in part, we have lost our ability to conduct civil dialogue. It is becoming a lost art. Our rational arguments seem to have lost their wind, and in their place, we substitute emotion, judgment, and often, single-minded zealotry. It is no longer about informing a view so much as it is a matter of enforcing a view, the “my way or the highway” school of thought. Within that, there is a deeper nastiness that has entered these conversations, a nastiness that proposes to judge anyone and everyone who dares entertain a view that is different from theirs. It takes the “my way or the highway” view to an extreme level, and it plays out in front of our eyes every day in certain news media and social networking sites regardless of consequence or damage done. Facts get distorted, actions often taken out of context and replayed in heavily edited fashion, and objective truth around an event or person its certain first casualty.

Sadly, I think this is part of a larger issue confronting each of us on our personal journey from childhood to adulthood. That issue is a steady erosion of what it used to mean to be an informed and educated adult. Education was less about answers than about provocative questions, it valued that journey of discovery. Personal growth was about challenging held notions and assertions, realizing that the more a person knows about things, paradoxically they come to know how much there is that they really do not, and may never, know. Today it seems we value more the person who has stopped growing, who has a ready answer for everything so long as it aligns with our preferences. In the past, growth often came through civil discourse – respectful dialogue that did not pass judgement as alternative perspectives became part of an expanding body of knowledge. An educated person was someone who could hear an opposing view without tossing a hand grenade at the other person. Debate could be, and often was, intense, but it was more balanced, more informed and less judgmental. Civil discourse was valued in and of itself as the mark of an educated balanced adult.

Some might argue that the issues we face today are more complex than those of the past using this as rationalization for bad behavior. To be sure, over the past 100 years, societal views on incredibly important and emotional topics like secession, slavery, women’s rights, racism, sexism, the environment, terrorism, individual rights, education, religion, and diversity/inclusion among many others have changed before our eyes. In each of these issues there were always opposing sides, even extreme, yet the belief in the greater common good still seemed to be a measured part of the dialogue. More often than not in our country’s history, that greater common good swayed the decision our nation would ultimately follow even in the midst of competing extremes. I sense a hollowing out of that middle ground. With its demise, we are only left with those competing extremes on every side of every issue. Without that moderating influence, we are also left with the very real presence of zealotry that sees the world and every issue through a single lens of their particular side’s making. Civil discourse is not only undervalued, it is not possible.

So what does this have to do with growing up to be a man (or woman)? I think quite a lot actually. During the growth process, each of us will either learn to value opposing perspectives as essential to mature growth, or to reject them as threats to what we accept as “truth.” Obviously, the challenge here is that there seem to be multiple “truths” on just about any controversial topic. In reality, such topics rarely resolve into a clear, single “truth”. So who really owns the “right” truth? I personally doubt that anyone walking on the face of this earth today has any greater claim to “truth” than any other person. Thus, what we really have are opinions, no matter how heartfelt. The person who grows up rejecting any alternative view is most likely to carry that behavior into adulthood. In essence, they stop growing as they stop learning. Moreover, the older they get the more they are disinclined to change. The net result is often a very angry, unhappy person unable to cope with a world that refuses to bend to their personal view of truth. It becomes personal, and so do their communications to others about these issues.

At this juncture, let me make it clear that I am not arguing against strongly held opinions or beliefs. As Alexander Hamilton once said, if you don’t stand for something you’ll fall for anything. Having an opinion, however, does not mandate intolerance of others and of their views, nor does it mean being closed-minded. It is possible to believe in something, and at the same time invite, listen to, and assess alternative views without passing personal judgment or attacking the other person. This is all part of being an educated, responsible adult and a productive member of society.

So what is the point here? First, I encourage each of you, male and female, to educate yourself within your means, to inform your beliefs and views while acknowledging that there are, and will likely always be, alternative views that do not align with yours. Second, I encourage you to deliberately and intentionally seek out those alternative views, and that you listen to them with open mind, heart and soul (back to the definition of integrity). Thirdly, that you suspend judgment of these alternative views, and more importantly, of the people who espouse them, so that you might at least understand why good people can view the world very differently without becoming personal enemies.

I think it would do us all good to take a breath, back away from the judge’s pulpit and realize that for the most part we are good people trying to make sense of challenging, emotionally-charged issues, and that none of us owns the right to judge or to declare the real truth. This is about civil discourse, a lost art of conversation and deep personal communication that cannot be done from a smart phone or a Facebook post. As we enter this next political season, I think the more we encourage civil discourse, tolerance, open-mindedness and humility, the more we will create the type of society that our forefathers envisioned. What decision will you make, and more importantly, what decision will you act on? As always, it is a personal choice to be a “giver” or to be a “taker.” Along the way, know that we are judged by our actions more than our words, and that we teach these next generations by example. Let’s give them something we can all be proud of.